The Place of Faith

There is a place that the Father of us all has prepared for you to dwell. It is there that His blessings are the atmosphere which you breathe. It is there that you abide right now. It is of great value to you that you acknowledge His presence every moment and consider the dwelling place that He has prepared for you. Look for Him. You will see Him. Then feast your eyes upon the beauty of HIS majestic presence and announce to all that the regal presence of the Holy Spirit is here, now!

Faith never looks back and does not ponder the present. Faith has a target on the future. “Faith is the substance of things hoped for the evidence of things not seen.” That’s what’s coming up. Why then do we do most of our talking about what was and what is? Our Words should be selectively chosen to describe what is about to happen. John 16:13 says, when the Holy Ghost comes “He will show you what is to come.” If He really is here then he wants to show us what is to come. In everything. No secrets. So, if we haven’t heard what is to come then our mouths should be shut up tighter than Jericho, until the “rhema” of God comes. Then, we should only speak the will and passion of the Father. 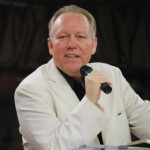 We can therefore say to the one who is sick, “Be healed! For that sickness is not the will of my Father!” When Zacharias was praying God shocked him and listened.  Then He sent Gabriel to give him the Father’s view of what is to come. Zac said, “How shall I know this is true?” The angel shut his mouth until it was impossible for Zac to argue anymore. We could really learn something from Zac, here.  We should keep our mouths shut until God talks and then declare His salvation from day to day.

There is a river that flows so very deep that precious few will rush into it’s depths. It’s the river that flows from the throne of God and in the midst of it and on either side of it is the tree of life, and that tree’s leaves are the healing for the nations! To go to the depths of that river it will take reckless abandon on the part of every one who will surrender to it’s current. “Trust in the Lord with ALL your heart. Lean not on your own understanding. In ALL your ways, acknowledge HIM and HE will make your paths straight.” Jesus has been very good to you. He will never leave you nor forsake you!

Count on that! “Faith is the substance of things hoped for and the evidence of things not seen.” Faith does not look at the past and holds no regard for it. Faith does not explain the now nor cherish the pleasures of it. Faith comes by hearing; and hearing by the spoken word of God! Faith looks to the future and sees the passion of the Father. Faith speaks what the Father sees and declares the glory of God! Faith looks for what the Father has planned for others and does not release anyone when they do not perform to our expectations, but rejoices in that which will soon be obtained.

Advance toward Him. Dive deeper than ever before! Surrender! Come out with your hands up!