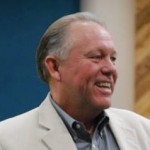 In an excellent article, Patrick Holloran wisely places the need for the Ecclesia to arise against the will of the devil. In Pat’s article he states, “The rulers that are not human in these realms are, in fact, delegated authorities that are commissioned by Satan to attempt to take over lands, waters, regions, etc…” You see, there is much more to God’s creation than what you can see and what science today mainly deals with. When I read that statement, my mind and heart were flooded with the kind of things that Jesus Christ did in His lifetime upon the earth, desiring to show us the will of His Father.

These “rulers” are appointed by one egotistical, ravaging, tyrannical, prince of darkness, who rules by fear in order to get these fallen and rebellious angels to do his will upon the land.

The will of God, however, has been in place all along and is not really an answer to the will of Satan. The will of God remains forevermore, and has been well established as the will of the Father and Creator of all things. Yet, this usurper and his minions are disrupting the will of God and deceiving the nations. They have even entered into the cellular levels of creation and distorted the will of God into Satan’s will.

When the disciples of Jesus ask him, “Master, teach us to pray (proclaim) even as John (the Baptist) also taught his disciples how to pray.”

Jesus replied to this question with a clear and concise answer that was a principle more than any rote recital of magical words.

“Whenever you may be praying {proclamation, declaration kind of praying}, be saying in words: Father! of us {plural-genative} in the heavens, let the name of you be {and continue being} holy (ized)!

Then it says, “Let her come! THE Kingdom of YOU!  Let BE-Being COME {this is just as in the beginning He said, ‘Light BE!’} THE WILL of You! And He caps it off with the destination of these strong and authoritative proclamations, by saying. “As in HEAVEN {singular, noun, dative, so this is the specific heaven} and on the LAND!”

So, more correctly viewed is the declarative statement:

“Come! Kingdom of God! Be done! Will of God! Just as in your throne room so it is on this land!”

Now, encapsulated within the revelation of this declaration is the will of the Father that is, and always has been, in the heaven of His throne. Jesus teaches his disciples (that’s you and I) to be proclaiming the rule and reign of God the Father upon the Land that He has given to us for our inheritance, and to declare His WILL upon that LAND to be the same as the WILL of the Creator and King. The Majesty of all creation has always WILLED it from His very throne room.

Practically speaking, I speak to every cell in my own body that the WILL of the Father has created you, and you WILL work according to His WILL. Thus, heaven comes through the veil of separation between heaven and the natural and demands His WILL upon the cells in my body as opposed to the will of Satan who wills sickness disease and untimely death.

I see the will of Satan working on my land that the Lord has given me for my inheritance, and I declare the rule and reign of God the Father upon and into the substances of that land. I demand the Land’s obedience to the WILL of the Father so that it must reject the will of Satan.

Please notice that we do not have to face off the devil or his minions or any evil force with this strategic force of declarative prayer. We are establishing the WILL of the King – His rule and reign. We are dispelling the deceit of the usurper who has illegally placed his will into operation upon and in my land. My land is my body, my home, my family, my business, my properties, my region and even my nation.

Kevin Ford voices a powerful principle in his article, Living In The Already Not Yet, when he pens, “Our words are one of the vehicles that brings Heaven to earth. In essence, we are resounding the sound of Heaven. Our very breath, if mixed with faith, becomes the prayer of agreement with the WILL of the Creator. This is the spark of all life, the passion of The Father, the substance of Heaven.  We are producing the proof that “ The Kingdom has come” and His will is being done on earth as it is in Heaven.”

Now there are other “death blows” that we can make on the will of Satan, but this is the beginning place for us to “wrestle” with those principalities and powers that have wickedly deceived the facets of creation around us. This is where we are coming from when you hear us praying in such an authoritative manner. For we do not pray for God to heal the sick, we take our God given authority over the body and see that disease is the deceiving will of Satan; thus, we proclaim the WILL of the Father of lights.

For convenience, I have included in this article post, the Greek Interlinear of this important scripture, Luke 11, verse 2: 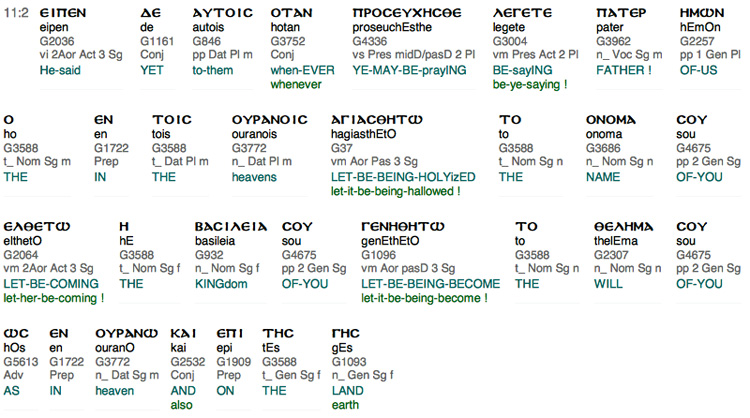 Dealing With Principalities Over The Land

“For we wrestle not against flesh and blood, but against principalities, against powers, against the rulers of the darkness of this world, against spiritual wickedness in high places.” (Ephesians 6:12 KJV)

Although many modern translations have replaced the word “wrestle” with other words, the Greek actually tends to be translated most correctly by using the English word for wrestle.

Proclaiming the will of God to each and every situation is at least a major part of the wrestlings that we do with powers and principalities, but it is only the foundational part of this wrestling.

Although we regularly “cast out demons” in the ministry of the Holy Spirit and in the working of miracles amongst the people; yet, when it comes to dealing with principalities and powers, we are said to be “wrestling” as opposed to “casting” them out. I believe this has to do with authoritative positioning of Satan’s minions and their places over the land. So, we “wrestle” with these land usurpers.

In the sport of wrestling, you must displace your opponent. That is what is meant by the word “wrestle” – the displacement of your opponent. This is meant to be a scriptural strategic stance of opposition against Satan’s hierarchy structure of placing a deceitful authority over the land to keep his will intact. Thus, we are to displace Satan’s will with the WILL that always was and always will be!

We can, perhaps, discuss in later treatise, the other strategic aspects of this displacement factor.

For convenience, I have also included in this article post, the Greek Interlinear of this important scripture, Ephesians six, verse 12: 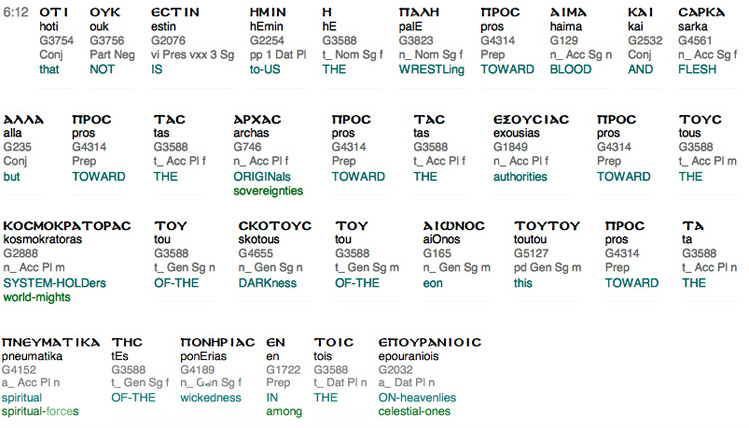 You can also listen to the audio version of this article that is read by Wayne C Anderson by simply clicking the button that says, “Audio Article Reading Listen Here”.